Eastbound on the LIE at Sunset 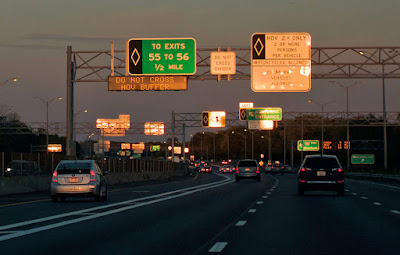 We were headed eastbound on the Long Island Expressway, on the way out to Orient for observing.  The sun was nearly set and most of the light was off the landscape.  I came up a hill to the top and suddenly there were these traffic signs over the road that were glowing with sunlight.  That's because they have Scotchlite on them.  Scotchlite has "retroreflectors" embedded in it, and those may be small glass beads or prisms that return the light in the direction from which it came making things many times brighter than normal.  It was an unreal sight, and fortunately I had my "toy" camera with me, and managed to quickly get this shot.  Yeah, I know, no shooting while driving...
Posted by Ken Spencer at 8:46 PM 1 comments 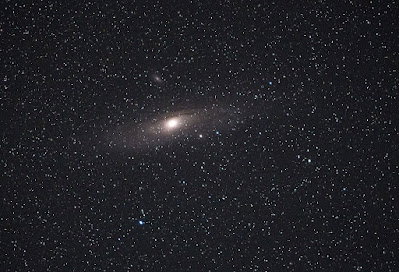 This is the Andromeda galaxy.  This is what our galaxy looks like.  But it is not us, it is our sister galaxy.  But if you were in the Andromeda galaxy and looked back at the Milky Way galaxy we would look like this!  For the photographers out there, this was taken with a 200mm f/2.8 lens, ISO 3200 and an exposure time of 30 seconds, on a special mount which tracks the movement of the sky.   But you need to be under a really dark sky.  The Andromeda galaxy is is a barred spiral galaxy with diameter of about 152,000 light-years, approximately 2.5 million light-years from Earth!  And it contains about one trillion stars!  The Milky Way and Andromeda galaxies are expected to collide in around 4–5 billion years merging to form a giant elliptical galaxy.  It is a wonderful sight in a telescope but in long exposures through a telescope, like this photograph taken from the Negev Desert in Israel, you can see it in all its magnificence! Andromeda Galaxy in Color
Posted by Ken Spencer at 9:05 PM 1 comments 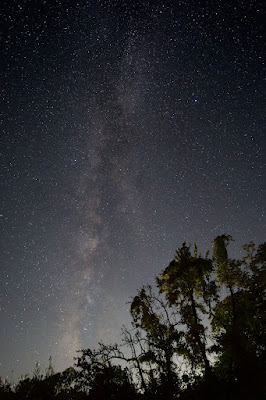 Well, here it is, the Milky Way!  It is a magnificent thing to see, and I think when I was putting together a talk on light pollution for a high school class recently, I read that 80 percent of the population lives under light polluted skies and has never seen the Milky Way!  I remember seeing it as a kid growing up in Connecticut, but I don't believe you can see it now where I grew up.  So the Milky Way is actually our own galaxy.  It is enormous beyond imagining.  Think of it as a 33 RPM record - it has diameter of 87,000 light-years but is only about 1,000 light years thick for most of it, but there is a bulge at the center of the galaxy.  It contains between 100 and 400 billion stars!  Since we are in the flat part of the galaxy, out toward one edge, when we look up out of the galaxy, we don't see as many stars as we see if we look toward the center, or out toward the edge.  In any case, it is a magnificent thing to experience if you can see it from a dark-sky site, like out west, or in an area that is 100 miles away from even small cities.
Posted by Ken Spencer at 9:11 PM 3 comments

The Joys of the Unexpected 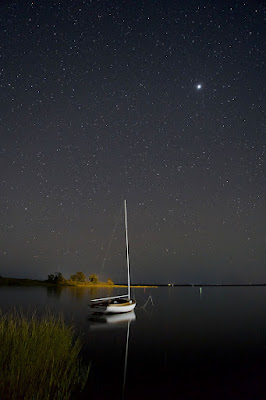 So a friend and I drove all the way out to Orient Point to do some observing.  Usually I just drive to Custer Institute, where I am a member, but on the last three visits, you could barely see the Milky Way because of light pollution.  So we drove for an extra half hour to a boat launch ramp in the middle of nowhere, and the skies were absolutely stunning!  The stars blazed with a brilliance you can only get from a site that is not light polluted.  While taking a break from using my telescope, and my camera to photograph some heavenly objects, I walked down to the end of the boat ramp and saw this!  I was stunned at how beautiful it was!  So I went back and got my camera and tripod.  There was absolutely no wind at all, and no waves, which is why I could make a fifteen second exposure of a boat on the water and have it not move at all!  The boat was illuminated by a security light from a marina a short distance away.  The brightest object near the top right of the photo is the planet Jupiter.  What an astounding thing to go looking for one thing and find something else!

I Know, This is Getting Old... 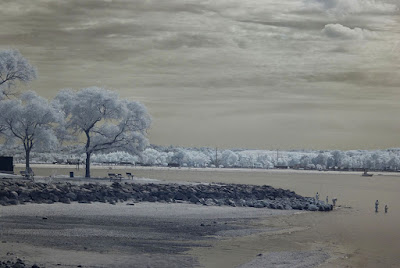 I promise this will be the last infrared photograph I post for a while.  Maybe.  I just think it is an interesting scene, with the trees and the clouds.  For most of the infrared photographs I have posted, I have converted them to just black and white.  But the recent photos, I have left as they came out of the camera, which means they have a slight bit of color in them.  But for some reason I have left the color in because it helps define, for instance, the trees in the distance from the water and the sky.  I did convert it to monochrome and a lot of the elements blended together.  Just in case you wondered.  I will post the monochrome version below after I convert this one so you can see the difference.  Maybe you find the slight color difference distracting?  That's the thing about this blog, you learn something new every day...   :-)  Which photograph do you like best? 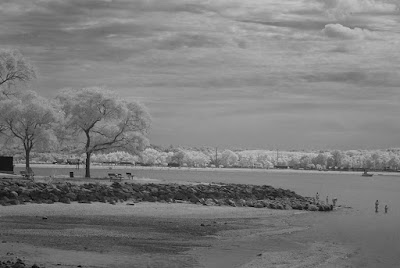 Seeing the World in a New Way 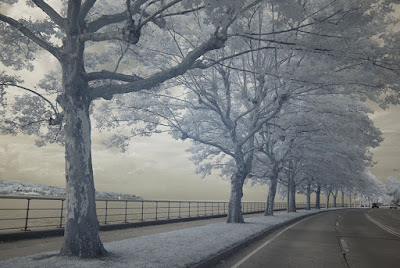 I am back to my old tricks again, using the infrared camera to make something that you are so familiar with, something different.  But there is something valuable here - the scene seems so completely changed to me, when all the foliage on the trees becomes something different than how we know it.  The whole scene seems lighter and brighter than it  normally would be and because of that, I want to spend more time carefully looking at everything.  So this makes me see the world in a new way, and that's always an interesting experience.
Posted by Ken Spencer at 7:57 PM 4 comments

A Light in the Steeple 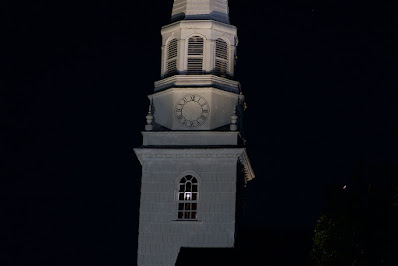 I spent all day trying to figure out a photograph for the blog post tonight.  No luck.  I looked on the way driving to my astronomy meeting.  No luck.  But on the way home, I drove by the Old First Church in Huntington, which is a classic white church with beautiful steeple, and there was a light in the steeple!  There's my shot!  So I parked the car and did a number of photographs.  This one represents the scene best.  So I did some research as to why a church might have a light in it at night.  Here is a quote from the Clover Hill Reformed Church, in Hillsborough, NJ:  "The lighting of the steeple each night is a reassuring sign of hope, of God's presence.  It is a signal light, shining in the darkness and pointing us to this truth."  I love that thought!
Posted by Ken Spencer at 8:49 PM 4 comments