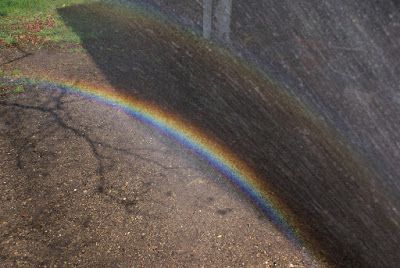 Once the addition was finished, we were left with sandy soil and small rocks, and no topsoil, because of the excavation for the foundation.  So a landscaper came the other day and took out several yards of the sandy soil, and replaced it with topsoil, and then planted grass seed.  So it is my job to keep the seed moist until it germinates.  The first day as I was spraying, late in the day, I noticed that the spray was giving me a rainbow.  But the rainbow was seen against brown earth - I needed a dark shadow to set the rainbow off from the background.  So today I was watering earlier in the day, and the shadow of the house was in the background, and the rainbow was a lot more obvious.  What a great project - making rainbows.  It was lovely, watching rainbows for an hour.

I wish you a pot of gold at the end of your rainbow!