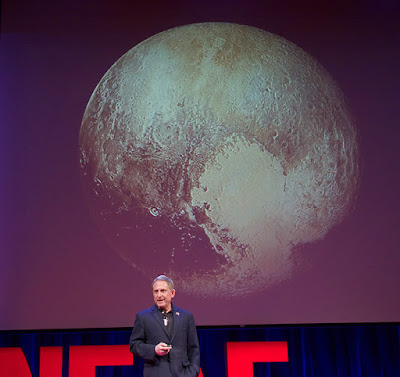 An exciting day today!  I spent the first of two days at the Northeast Astronomy Forum.  I have been going to this event for about 25 years.  The  highlight of the day was a talk by Dr. Alan Stern, the "principal investigator" (meaning the guy who ran the whole thing) of the New Horizons Project, which sent a spacecraft to Pluto.  The craft was launched in January of 2006.  It traveled for nine years and three billion miles.  On July 14, 2015, it flew 7,800 miles above the surface of Pluto,  making it the first spacecraft to explore the dwarf planet. During the flyby, instruments gathered scientific data and extensive photography was performed.  I can't tell you how cool it is to listen to and to see in person, a planetary scientist like this and have him tell us first hand what has been discovered so far from the data and photographs.  Want to see something really impressive?  THIS is the best photograph that had ever been taken of Pluto, by the Hubble Space Telescope, before the New Horizons mission! 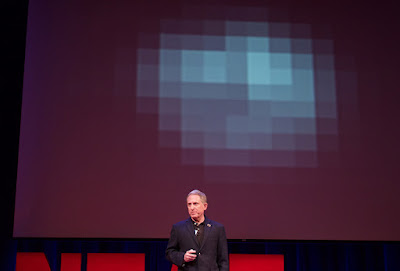 Hey Ken-
One of your numbers might be off. Pluto is a little over 3 Billion miles (with a B) distant... But what is 3 orders of magnitude among friends (Factor of 1000)! What continues to be amazing is that it is so distant they've only sent back half the data so far!
-Dean

So let's see if I have this right. The top photo was taken with a Canon and the bottom one with a Nikon?

Dean: Million, Billion... As they say in New England, "A trifling distinction..." :-) Thanks for saving my credibility, yet again! :-)