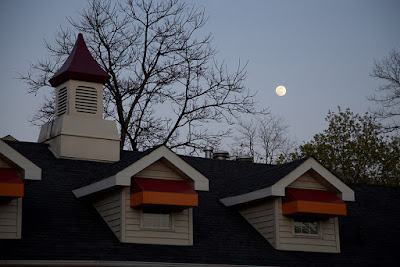 Ansel Adam's most famous photograph is probably "Moonrise, Hernandez, NM."  I was stunned when I saw the beautiful 16x20 inch black and white print at the George Eastman House for the first time, back in 1960.  Whenever I see a moonrise, I think of his image.  So when I shoot something like a moonrise at Dunkin' Donuts, it is with tongue in cheek.  I go to Dunkin' Donuts every Wednesday night to buy coffee and donuts for the meeting.  By the way, in 1964 when I graduated from RIT, I could have bought a 16x20 inch print of the Ansel Adams image for $175.  I wish I had.  I haven't checked the price of that print recently, but ten years ago, those prints were selling for $25,000.  That is not a misprint. WHOA!  I just did a search, and found that two "Moonrise" prints were sold and you won't believe the prices:  One went for $518,500 and the other sold for $362,500.  I am stunned!

1964 was so long ago that $175 then would be a few million dollars today adjusted for inflation. Therefore the prints are cheaper today. BTW, was 1964 the first graduating class at RIT?

Dude, you are so funny! The first graduating class from RIT, after it changed it's name from "The Mechanic's Institute" was during the Cretaceous period. Most of the dinosaurs had died off by then. Fortunately I escaped the devastating Triassic–Jurassic extinction event!

No doubt the dollar is not what it used to be. But I think a check today north of $300,000 for a $175 investment would still feel pretty good!

OK, according to the Internet, the ultimate source for lazy researchers, $175 in 1964 would be equivalent to $1,339.54 today. If you could grab one of those puppies now, even with the inflated dollar value, you wouldn't hesitate knowing their current value. But this is one of those shouldawouldacoulda moments. You didn't buy a print, but you've had it burned in your memory all these years, enjoying the image over and over - for free. I'd say you got more than your money's worth by leaving it for another collector.

It is one of the largest coffee and baked goods chains in the world,
with more than 12,000 restaurants in 36 countries.
The chain’s products include doughnuts, bagels, other baked goods,
and a variety of hot and iced beverag
https://telldunkin.online/