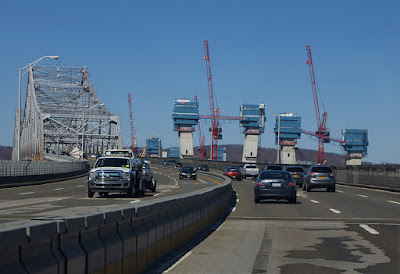 The new Tappan Zee Bridge has been under construction since 2013, and I notice big changes in the new bridge each time I have crossed on the old bridge which runs alongside. The original Tappan Zee Bridge was built during 1952–1955.  The Tappan Zee was built in a period of material shortages during the Korean War.  The deteriorating current structure bears substantially more traffic than its designed capacity. Unlike other major bridges in metropolitan New York, the Tappan Zee was designed to last only 50 years.  So how comfortable are we driving across this structure, knowing that it is now 11 years beyond it's design life!  The new bridge is going to be spectacular thing to see.  Just  wait!
Posted by Ken Spencer at 9:47 PM

We have driven over this bridge twice in the last two months and it amazes me to watch the construction and the men working so high above the water. This is the route we take to visit Lauren's family in NJ so have watched the progress the last few years. How do they manage to raise the structures so high with the cranes? Crazy!
Joan