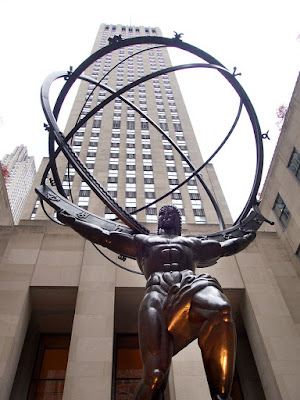 There are so many landmarks in Manhattan, and when I am on my way to a museum or somewhere else I am beginning to think that I am not paying attention.  But with my friend Lachlan, from Australia, I was sightseeing with him, almost as if I had new eyes!  As we continued down Fifth Avenue we came to Rockefeller Center and this magnificent statue.   It depicts Atlas the titan, with exaggerated muscles, supporting the celestial vault on his shoulders.  A famous figure from Greek mythology, Atlas was a half-man, half-god giant known as a Titan, who helped lead a war against the Olympic gods. After the Titans’ defeat, Atlas was condemned to carry the world on his shoulders as punishment. Atlas is one of Rockefeller Center’s greatest Art Deco icons.