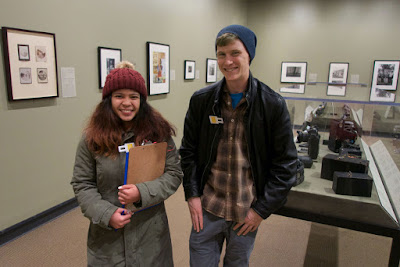 I went to Eastman House today to see some exhibits.  In this, the second exhibit that I viewed,  I listened to a discussion between these two, who were standing next to me..  She is April and he is Andrew.  She had form on a clipboard and she took notes about some of the photographs and objects in the exhibit.  So I asked them if this was some sort of class project, which she said it was.  They are both RIT students - she is a film student and he is a chemical engineering student.  So we had a nice conversation, and I explained that I was an RIT grad from 54 years ago.  It brightened my day to meet them and to have a conversation with them both!  I asked if I could take their picture, and they said "Sure" which was nice.  Now you all get to meet them too!

Enjoyable day for you! Have a happy Thanksgiving.
Joan