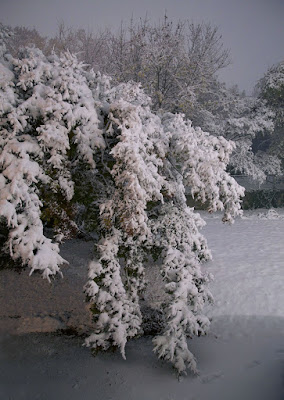 I watched as the forecast one inch of snow turned into a lot more snow than that.  It was a wet snow so it stuck to branches, which made for pretty pictures at first.  Then as the heavy snow continued I began to get worried.  All the trees still had leaves on them, so the snow had a lot to cling to on the branches.  When I looked out late in the afternoon, I was troubled to see that many of the ends of the branches of the beautiful Japanese maple were on the ground!  I went out with a snow shovel pushed up on the branches that I could reach overhead.  When I pushed up, the snow on the branches came tumbling down - all over me!  But that's OK, when the snow was gone from the branches, they popped back up to their normal height.  We did lose two branches that had broken off from the weight, however.

Sorry to hear that your Japanese Maple lost two branches but glad that you saved the Day! We can look forward to photos in the Spring of this gorgeous tree.
Joan

It will surely be a sad day if your beautiful and photogenic Japanese Maple has to be removed due to disease or destruction by mother nature!

Glad that you only lost 2 branches. I would surely miss photos of this gorgeous tree. The snow was extremely heavy. I had to clean off my car in a hurry in order to get to work - not fun! betsey