Disappearing in the Morning Mist 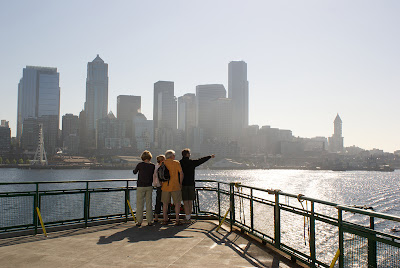 This is the big car ferry from Seattle to Bainbridge Island, Washington.  We left fairly early in the morning on this trip, and there were areas of fog on the water, and the city was backlit by the sun.  The further we got from the city, the more it receded into the haze.  There is something absolutely wonderful about riding ferries - the smell of the ocean air, the breeze in your face, and the sense of being in a kind of limbo during passage.  In a way it feels like time stands still during the voyage.  From Bainbridge Island we drove on up to the Olympic Peninsula, to the town of Sequim, Washington, one of the premier growing areas for Lavender in the United States.  Wait until you see THOSE photographs!