The Man on the Median 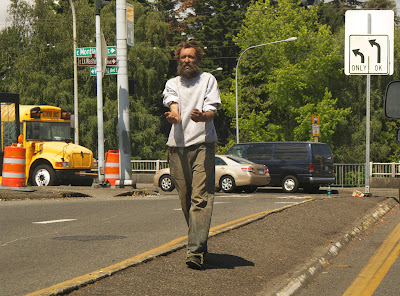 Leaving downtown Seattle every day, we had to drive up to what is called the University District, where we were staying.  You take I-5 to the 520 and get off at the Montlake Boulevard exit.  And every day, this man would pace up and down the median, by the stoplight.  He held both hands out in a kind of strange way - not one hand out looking out for a handout, but instead both hands together this way.  I wasn't sure if he was asking for a handout.  His speech was unintelligible to me.  On the second day, I had to stop at the red light near him, and handed him a $5 bill.  On the median in the background he had a bottle of water and some kind of plastic bag.  He was always there in the afternoons, but I don't know when his day starts.
Posted by Ken Spencer at 9:05 PM

His day on the median starts in the late afternoon. He's a computer programmer by day.

Your new found friend could be an eccentric millionaire laughing all the way to the bank with non-taxible cash handouts from well meaning people.

Good for you. I would have done the same thing. Maybe, just maybe, he's scamming, but I think, more likely, he is one of God's creatures who has lost his way and can use whatever bit of kindness he receives. Reaching into your pocket to give him money is a gesture from the heart. There are those who would call people like us foolish for wanting to help, even if it's only a little. But I'd rather face the world as a fool who tries to do good than a cynic who belives in no one.

Thanks to Anonymous for your thoughtful comments. I am always a soft touch. I won't miss the five bucks, and maybe it will make a difference. I would rather err on the side of helping someone, at the risk of being scammed.