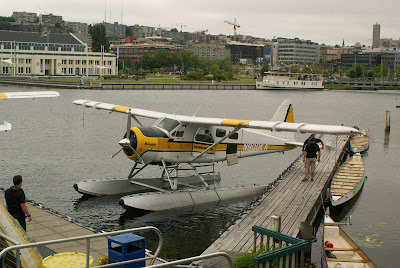 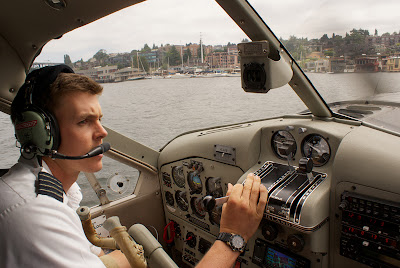 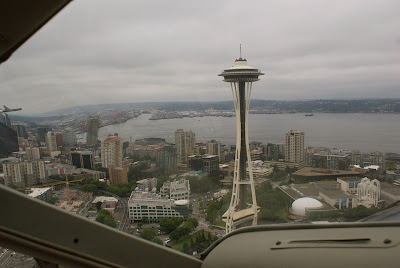 Seattle is probably one of the seaplane capitals of the United States - well, at least in the lower 48.  I was excited about coming out here, because I hoped I could ride in one, on a tour of Seattle from the Air, AND that I could fly one myself, which I am scheduled to do on Saturday.  This aircraft is a DeHavilland Beaver, on floats, designed in 1946 (when I was 4 years old!)  They were manufactured up until 1967.  One of the really cool things is that they are powered by big radial engines, and have a wonderful deep throated sound when they are running.  This is a classic aircraft, and it was a thrill to finally get to ride in one.  I couldn't pick just one shot, so here is a view of the dock at Kenmore Air at Lake Union, and then a shot from inside of the pilot just before we took off, AND...  A shot out the front window as we flew by the Spece needle.  That must have been impressive for the people looking out to see the aircraft headed in their direction!
Posted by Ken Spencer at 10:17 PM

Ken-
I'd be more comfortable if my pilot were old enough to shave!
-Dean

I thought you said it was the Wright Brothers airplane that was designed when you were 4 years old.

You must be in your glory - Are you smiling like you are 4 years old? Great photos!
Joan

Dean: That's what Kathy said! I said that the value of youth is a much quicker reaction time, as compared to an old guy like me!

Mike: VERY funny! No the Wright brothers came along AFTER I was born!

Glad that you are having such a great time! Enjoy your own piloting experience on Saturday and hopefully someone else will take a picture of you. bsk