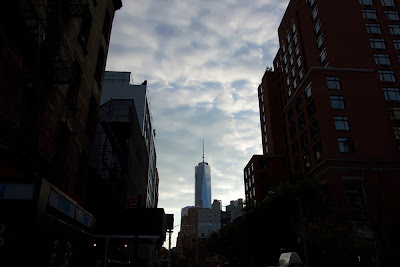 On our way back to the subway from our lunch in Chinatown, I looked south along one of the avenues, and was surprised to catch a glimpse of the new One World Trade Center.  It had just been declared the tallest building in the United States, because they said that the antenna on top was, in fact, a permanent structure.  I took this picture because I loved the contrast of the bulk of the dark buildings, compared to the relative elegance of One World Trade.  The thing is, however, that this is a stunning structure sweeping up into the sky, and my photo shows it dwarfed by the foreground buildings. 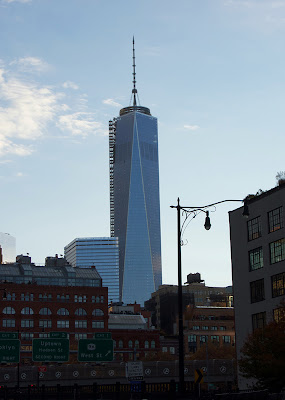 A block or so later I saw this view, and we can see the building  much better and it soars over every other building in the photo.  It represents 1 WTC more realistically.  However, I think that the first photo is far more interesting.  Perhaps because of the contrast in size, and the contrast in color.  But it doesn't represent the tallest building accurately.  I need to go down there and photograph looking straight up at it.

From the Chicago Tribune: "It turns out that 1 WTC's spire is actually a broadcast antenna that was supposed to be sheathed in a decorative cladding. This aesthetic feature would have made the antenna an integral part of the building's design--and thus, technically, a spire. Spires count in height measurements. Antennas don't.

But now, the AP says, the cladding has been shelved over maintenance issues........."
Interesting debate over who has the tallest building - NYC or Chicago. Debate to be continued!