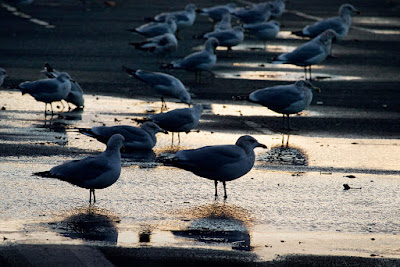 On the day I photographed these gulls, the wind was blowing at 20 mph and gusting to 30!  The gulls stayed grounded because when they are  close to the ground they retain more of their heat.  At least that's my theory. I mean, the wind was howling!  I had an idea, though.  I was headed south toward where the power plant used to be.  I thought that when I turned around and headed back to the parking lot, I would walk into the lot where the birds were.  I would set the camera lens to wide-angle, and the shutter speed to 1/500 of a second, and then after I slowly walked toward the birds, I would start running toward them at the last minute.  I hoped they would take flight and I would get a photograph of a hundred birds flying up into the sky.  But when I got back to the parking lot, the birds were gone!  Oh well, at least I got this shot.

Great shot. I'm sorry your plan did not work but try again one day. :-)
Joan