My New Friends from Chile 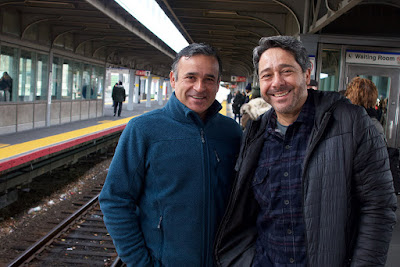 I was sitting in the waiting room of the LIRR in Glen Head this morning, having my coffee and one of Kathy's scones.  These two men came in and looked around and seemed puzzled.  They were holding train tickets.  So I asked if they were going to Manhattan, and they said "yes."  I said: "You are on the right side of the tracks for going to New York."  And then I explained how the train would stop in Jamaica and everyone would have to get off and switch trains.  We walked out to the platform for the arriving train, and we started talking.  We got on the train and sat across the aisle from each other and talked all the way to Penn Station!  They are Angel, on the left and Mauricio, on the right, both from Chile.  They arrived here in the US. on October 1 to visit relatives in Manchester, VT and Sea Cliff and were headed to Manhattan to see some sights, including St. Patrick's Cathedral and the New York Public Library.  Here's the traumatic part - right after they arrived in the United States, Chile, which is a very peaceful and prosperous and politically stable country has been rocked by protests and rioting.  Looters are setting fire to churches and subway stations!  They are not sure what they will find when they return home.  We had such a nice talk about their country and our country and about people and how they behave.  I am worried for them and what they will find when they return home.

I'm sure in our national climate at this time, two foreigners appreciated your friendliness and guidance. It's nice you are so welcoming and social with other people. Trace

Of course you made friends with these strangers from Chili. I'm glad you could help them out with train schedules, etc. It is wonderful that they are traveling but how sad that don't what they will return home to.
Joan

Hi, Ken..I'm proud of you for offering a helping hand, some kind words and showing the true nature of New Yorkers to these visitors from Chile! This is a lovely post! Vaya con Dios, mis amigos!! Babs

Typical Ken. So helpful. Chatting with strangers. I am sure they appreciated your kindness. So sad to read they do not know what they will encounter when they go back to Chile. betsey