Back from New Mexico! 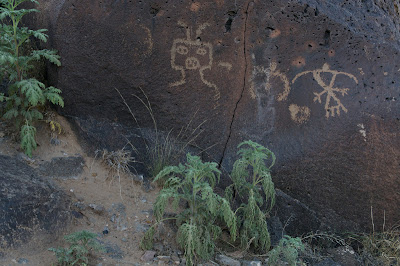 So I am now back from New Mexico, and it was an astounding trip! I can't decide whether or not to post the photographs in the order in which I took them. I will figure that out later. When I arrived in Albuquerque in the afternoon, I had three hours before dinnertime, and I decided I didn't want to waste it. I took a chance and drove over to Petroglyph National Monument. I spoke with one of the rangers and got a suggestion of which of several sites to go to with my limited time. The site I chose was a 2.3 mile round-trip. You just hike along the base of this canyon and look for petroglyphs on the dark black rocks along the route. Petroglyphs are made by chipping away the dark "varnish" on some kinds of rocks. It is not clear what these particular figures represent, but they are a joy to look at, after the "treasure hunt" you need to go through to find them in the first place. They are not easy to find.
Posted by Ken Spencer at 9:31 PM

Sam wrote that on a desk when he was very young, long ago. It means "the teacher doesn't understand my behavior... .

Welcome back! I am amazed that petroglyphs have survived so well over so many years as they appear to be very shallow carvings. Regardless of the order you post future photos from your trip the New Mexico, I am sure your blog fans will appreciate every photo with interesting comments.

So glad you are back. Hope you had a wonderful adventure. I am looking forward to more blog photos and stories.
Joan

It was an astounding trip, with photography of the Pueblo ruins, the night sky, and then the annular eclipse of the sun! Wow!