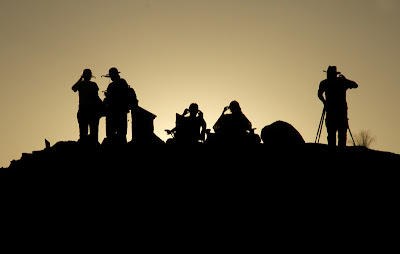 A number of photographers were set up on a small plaza within the ruins of Pueblo Bonito for the annular eclipse. After totality I wandered over to behind where they were, hoping against hope that the sun would begin setting in the haze, so I could get the photographers in the foreground, AND a partially eclipsed setting sun. No luck with that, because with such clear skies in New Mexico there was no haze, and the sun was too bright then to photograph the sun without a filter. But so it wouldn't be a total loss, I photographed just this group of photographers. Imagine how cool this would be if the eclipsed sun was in the picture!
Posted by Ken Spencer at 8:11 PM

This looked to Sam like a mountaintop meeting of Chassidim!

Sam: VERY funny! Made me laugh out loud!