I Finally Got it Right! 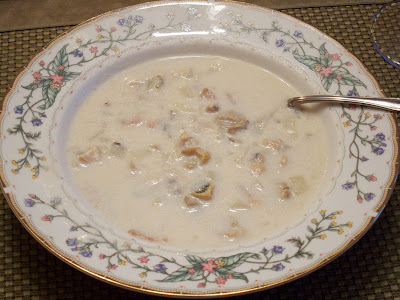 About a month ago, I opened a can of Progresso New England clam chowder. I love their Manhattan version. The New England version was completely white in color, and I could see diced potatoes, but hardly any clams. It was the worst soup I had ever had! So I decided to make my own chowder. I called my sister to get my Mom's recipe, but Joan said that mom just had the recipe in her head. Of course! So I found a good looking recipe in a 39 year-old copy of "The Joy of Cooking." It was a large recipe, and I cut it in half, but was not careful about the division. The soup was great, but there was too much bacon taste to it. So then I made another batch a few weeks later, and after steaming the clams, they said to saute the chopped clams before adding them to the soup. They were tough. So the other day I made my third iteration of the soup and it was perfect! This is what it looked like tonight when I had the last bowl from that batch. Notice how you can SEE the clams! Yum!
Posted by Ken Spencer at 8:13 PM

I think you need some volunteer taste testers to confirm your perfection. ;-)

As always, you provided a lot of information with today's photo blog but you either inadvertently or intentionally (for secrecy reasons) left out a very important piece of information. For your third iteration, how did you precook the clams to avoid toughness? I also love both Manhattan and New England versions - two really different taste treats.

The clams are steamed open in a covered pot. It seemed strange to saute them after that, with the onions, in bacon fat, but I did, and it was a mistake. I have two volunteers in Connecticut who are faithful readers of the blog, so after I drive up there with a pot of this stuff, they will be reporting back. :-)

Cannot wait to report back :-)bsk