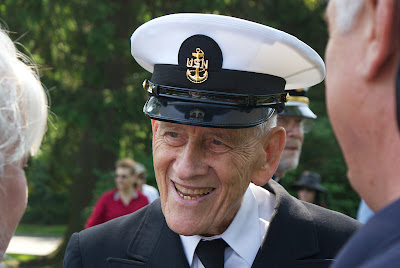 Every year Sea Cliff has a Memorial Day Parade, and I am always so thankful that we have this part of "Americana" right here. So I go to the parade every year and look for a photograph. I photographed a number of different scenes today, but just as I was about to leave the grounds where the ceremony is held at the end of the parade, I spotted this face. His name is Charles, and he is our neighbor from down the street, and he is a U.S. Navy veteran from the Second World War. He served in the Pacific on a "mini-flattop" as he explained to me. Sort of like a small aircraft carrier. It's funny, after shooting all kinds of images of the parade, this photograph - of just one person - seemed so much more significant than all the other photographs, as a way to honor our veterans.
Posted by Ken Spencer at 6:40 PM

You captured Memorial Day and a thank you to all of our Veterans. Very kind smile.
Joan