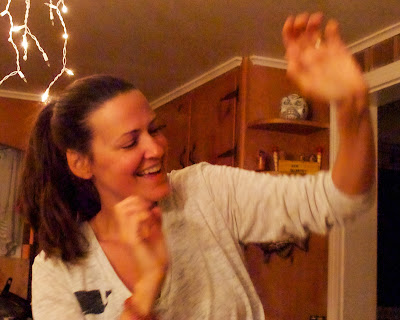 We are in Montauk visiting Amy, and she told us a story about a brilliant photographer friend of hers who made a short video for someone and it was of him dancing in slow motion.  She and another friend thought it was so cool, so they made a video of themselves slow dancing.  Tonight when we were talking, she suddenly started doing a slow motion dance.  It was so funny to see, as if it was filmed with a high speed camera, but in real life.  So, me being the day, I asked for a command performance, and shot this.  Of course it looks the same as if she was dancing at normal speed.  But you have to trust me on this - she WAS dancing in slow motion!

Wonderful that you both were able to visit with her :-) bsk