Why This Picture isn't Very Good 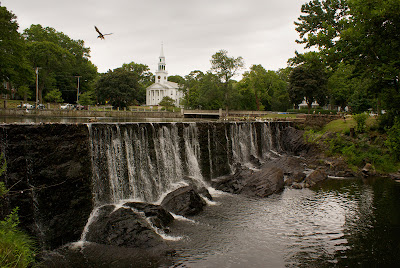 So I was on my way to Vermont for the Telescope Maker's Conference. I stopped to have lunch with two of my sisters, Joan and Betsey.  Uncharacteristically, the service in the restaurant that we always go to was impossible.  It took nearly an hour to be served!  And I was under a deadline because I needed to be at the bed & breakfast in Vermont by 5 PM.  There was no time to waste. BUT...   I wanted to stop and look at this iconic scene of Milford, the duck pond and waterfall behind town hall.  This was one of the first scenes I photographed as a kid when starting out in photography, because everyone in the photo club I belonged to shot it.  So I was in a huge hurry, and only took five minutes to look for and take this picture. And then there was not much water coming over the falls. And did I mention I was in a hurry?  So I managed to take several views in five minutes and then dashed for the car.  In the winter, with a lot of water flowing, and the falls iced up, it is a much better photograph.  I will have to come back in wintertime.  By the way,  I have now been in Vermont for less than 5 hours and I already have a billion pictures for blog posts!  Stay Tuned.

So, you left us hanging. Did you get to the B&B on time?
I'd like to visit this place myself if I were ever in Connecticut. You even managed to capture a flying duck or some kind of creature in the air. Best thing is the story of a brother, spending time with his sisters. Sweet.

Actually, it IS a beautiful image, and the cloudy sky and overall coloration are reminiscent of the calmer, quieter, and lovelier era when all that you see was constructed. It was a time when many families were closer, too, as tours still is.

I like this picture and I kept reading to try to figure out why this picture wasn't good. The scenery is beautiful-the green colors of summer, the water, the church and the sky. Calm and peaceful. Trace

You're going to Stellafane!? I'm jealous... Went once, back in '88, talking to a friend about going again one of these years! -Dean

I got to the bed and breakfast on time. And I think you are right - this photograph is better than I described it. It was just that in my mind's eye I know how beautiful this can look either in winter, or with a lot of water flowing over the falls, and so this photograph seems to pale in comparison.