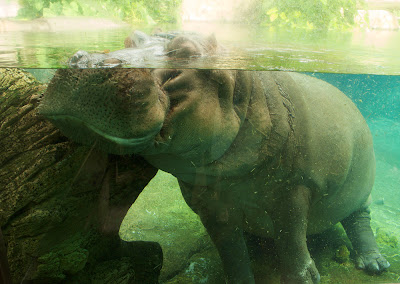 This is a Hippopotamus, and you don't normally get anywhere near this close to them.  I have seen them in the wild in Africa, and the boat skipper gave them a wide birth on the river.  The hippopotamus is one of the largest four-legged animals, and, despite its stocky shape and short legs, it can easily outrun a human. Hippos have been clocked at 19 mph over short distances. Is that unbelievable?  The hippopotamus is one of the most aggressive creatures in the world and, as such, ranks among the most dangerous animals in Africa.  So it was nice to have inch-thick glass between him and us!

Awesome animal. Wish I could see it upclose. Are they ever tamed? Come to think of it, I can't remember seeing one in a circus doing tricks the way elephants do. They always appear friendly to me, maybe because of their big bodies and little legs. Do they eat other animals or just plants? If they chase you, do they try to kill you? And if they don't eat meat, do they kill you only because they feel threatened?

These are all really good questions. My understanding is that they eat plants. But one of the stories I heard in Africa was that one came up underneath a log canoe with three people in it, and bit the canoe in half, and then bit some of the occupants. I forgot how many died. I have no understanding of why the Hippo attacked, however.