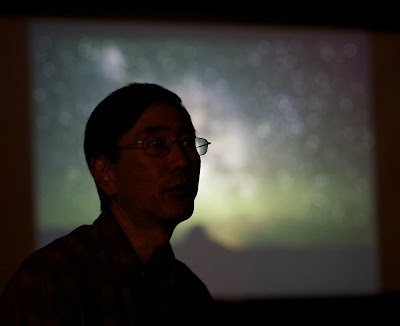 Tonight was a spectacular night at my astronomy club.  My friend, the photographer Stan Honda, came to our club to talk about some of his work.  First he showed photographs he has taken over the years of the launches and landings of the Space Shuttle at Cape Kennedy.  They were simply stunning!  Then he showed a number of photographs of the night sky that he has been taking over the past five years in the national parks of the southwest where dark skies are everywhere. Those photographs knocked everyone's socks off.  I wanted a portrait of Stan speaking, and so brought a light to illuminate him when he was talking.  Those photographs are nice.  Then I wanted to try something completely different, and shot this silhouette, with the light off, with his photograph of the milky way over a mountain, behind him.

This isn't a comment on your photo; it's a statement about your subject. I know Stan Honda's work and as remarkable as his pictures are, that's nothing compared to the remarkable person he is. He's a gentle soul and someone worth knowing. And it's nice to see that his work is appreciated by another great photographer.

Stan's work is stunning, and he is such a wonderful guy. I am so happy that we re-connected after a whole bunch of years. I was worried about what he might think of the photo, and so it was nice to get an email from him this morning. I had sent him an email last night with both photographs, and he said that the other shot was nice, but perhaps preferred this one because it was more subtle. I have received several emails this morning with rave notices about his presentation last night!

Ken-
Of course, when you are bragging on somebody, it is always best to provide a link as convenience to those who want to see his work!
-Dean