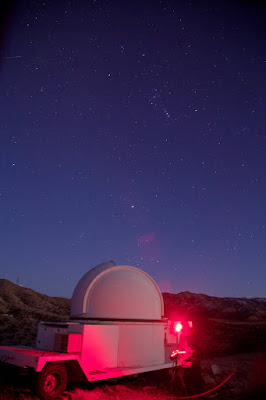 On our second night in Magdalena, we headed up to our friend John's observatory, located on a ridge up behind his house.  Socorro, NM is 80 miles south of Albuquerque, and then Magdalena is 30 miles west of Socorro.  It is dark there, because there are no large towns nearby.  So it was a thrill to be observing under some of the darkest skies we have seen.  This is a shot of John's observatory, and it is illuminated by the red headlamp that Stan was wearing as he was doing some night sky photography.  The constellation up near the top of the picture is Orion, the Hunter, which you might recognize from the three stars in his belt, and the three bright stars of his sword.