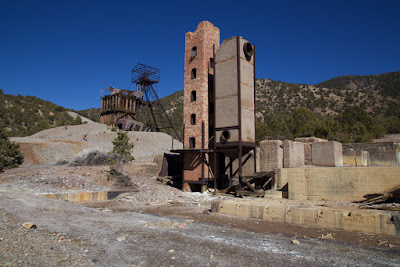 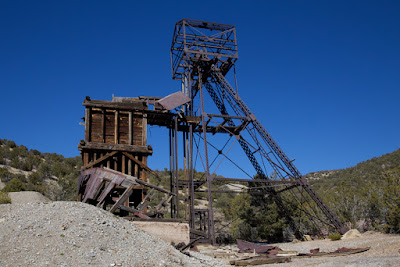 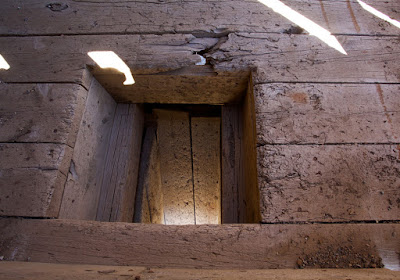 An abandoned mine!  Oh happy day!  We were told about this mine by Rush Dudley, who was the moving force in putting together our photo exhibit, and John Briggs, who lives in Magdalena told us how to get to it.  You all know how I LOVE ruins!  This mine was the foremost mine in the 19th century in New Mexico.  Prospecting for this mine began in 1886, and the black steelwork, called the "headframe" was built in 1906.  The mine closed in 1947.  The headframe stands over a vertical shaft that descends nearly 1000 feet, and that is connected to a maze of more than 30 miles of tunnels.  The headframe has pulleys on it, and cables ran over them and they were used for lowering workers down the shaft, and for bringing the ore to the surface.  I have not been able to determine what the two chimney-like structures are.  I did climb up on the wooden structure to the left of the headframe because I was really curious what was inside.  This structure was where the ore was deposited after coming up the mineshaft.  You can see how battered these heavy timbers are.  By the way, the mineshaft is open and surrounded by some incomplete fencing, so you can walk right to the edge and look in.  I dropped half a dozen stones down the shaft,  one by one, counting the seconds until I heard the rocks hit.  It took about 5 seconds and by my calculations, that meant the shaft at present is 500 feet deep.  Yikes!

Oh happy day! I can see the smile and enthusiasm on your face. Nice to hear that you would drop rocks down the shaft rather than your own body to explore. Interesting that you were able to explore. Great photos.
Joan