The Moon, Venus, and Mercury at Dawn 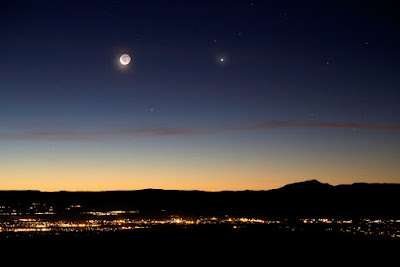 What an astounding start to our day today!  We woke a bit after 4 AM, then drove over to pick up Rush, our friend who put together the photo exhibit, then drove about 8 miles out of town, up route 66 to a hill overlooking Albuquerque.  It was dark and we were looking to view the five planets that are visible all at once, about an hour before sunrise.  What I forgot about was that there was a crescent moon, and that, along with two planets was the star of the show!  What a spectacular dawn, to see the moon rise, and Mercury shortly after.  But man, were we COLD!  The temperature was in the low 20's and we were outside for over an hour.  It took several hours to warm up.  But it was all worth it, because seeing this all in person was just sublime!

Thank you all for your comments. I would hate for all of you to have to get up as early as we did, but I wish you all could see this in person. It is just beautiful and sublime.