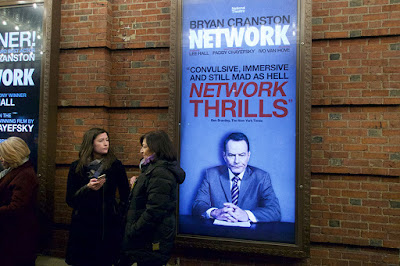 About a month ago, Kathy mentioned that she was going to go to the city with three of her friends to see Bryan Cranston in "Network" on Broadway.  We are huge Bryan Cranston fans, after first seeing him in all the seasons of "Breaking Bad."  We also saw him on Broadway in "All The Way With LBJ" which was spectacular.  So I was disappointed that I wouldn't be seeing this show.  Then Kathy said "why don't you get a ticket and see it?" which is what I did tonight.  It is a wonderful show, and Bryan Cranston was spectacular as Howard Beale, a disenchanted TV anchor.  Maybe you have seen the movie of this story, from 1976.