Waiting for the Rocket Launch 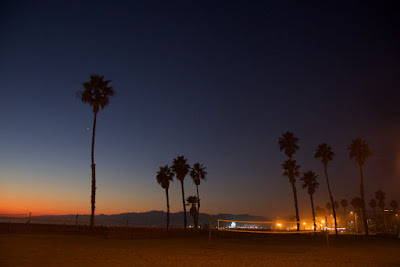 There has been a heavy lift rocket launch scheduled for the last two days, at Vandenberg AFB.  The launch site is 120 miles from Venice.  But when we were here in September, we just happened to see the end of a launch from the street outside the house and it was amazing.  So this time we decided to go to the beach for the best view.  Two days ago the launch was scrubbed because of high winds.  Today the countdown got to within 5 minutes of launch, and then it was scrubbed because of a Hydrogen leak.  Bummer.  But I did get this nice view of the mountains in the distance where the launch would appear. 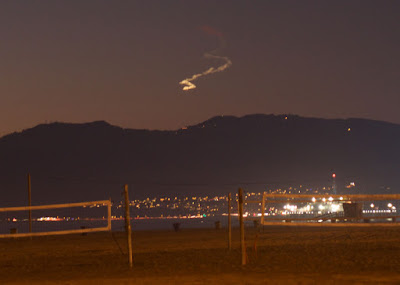 About 15 minutes before the launch time, this streak in the sky appeared - it almost looked as if it was the launch of some smaller rocket.  It hung in the sky, until it was distorted by the high level winds.  I couldn't find any reference to what this object might be.  It was a beautiful sunset, and we were at the beach, so the time wasn't a complete loss.

Hey Ken- I saw a reference to the trail you saw - evidently a meteor train! Witnessed by at least one amateur astronomer...

The first photo of the night sky is such a gorgeous color! Glad you captured that one.betsey