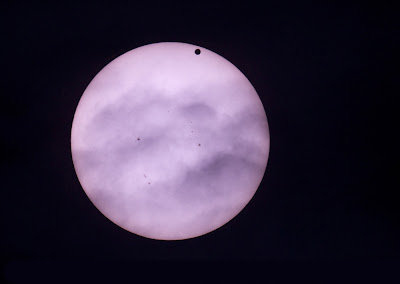 This is a photograph of the Transit of Venus, 2012, and I got to see it! For three minutes! I set up some big binoculars and a telescope at Memorial Park in Sea Cliff up above Long Island Sound. There were four of us there with either telescopes or binoculars. The transit started at about 6:00 PM and continued until sunset, two and a half hours later. The skies were completely clouded over at 6:00 PM and it had been raining for fifteen minutes! At about 6:30 there was a blue patch of sky that moved to where the sun was, and a number of us got a chance to view the transit. I watched through the telescope for a couple of minutes, and then put my Nikon on the back end of the scope and started shooting. I think I made about a dozen pictures before it clouded up again, and stayed cloudy until after sunset. So it was only three minutes, but I was thrilled I got to see even that much of the transit! There were 20 or 30 people in the park with us, and they were thrilled to have a chance to see the transit with us. The significance of all this is, that the Earth is only slightly larger than Venus. So think of this dot as the size of the Earth! See how small we really are.
Posted by Ken Spencer at 8:58 PM

Happy that you were able to catch this. Too cloudy in CT.
Joan

Hi Ken-
Consider yourself blessed - glad you got to see it! Better observing conditions in Tucson, in fact I got a nasty sunburn - my dermatologist will be angry! Got some good shots and shared the view with 3,000 of my closest friends on the U of AZ mall. A few pics on our blog at www.theketelsens.blogspot.com.
-Dean

Glad you were able to get even 3 minutes...knowing you, it would have been so disappointing for you to miss it completely.

So incredible that you got a shot! bsk