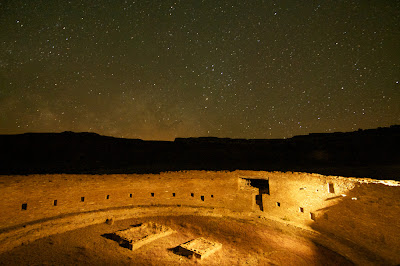 This is the great kiva of Casa Rinconada, a 66-foot diameter structure that was once used for ceremonial purposes. I photographed this during the day but I had seen a photograph of a structure like this that was done at night, and that had been lit in some way. So I made sure to have a regular two-cell flashlight with me on the trip. After doing some star trails at the big pueblo, we came over to this site. I made a 1 minute exposure of the stars, and while the shutter was open, used the flashlight to illuminate the inside of the structure by "painting" the walls with the flashlight. I had no idea if the flashlight was bright enough to light up the scene. I was hoping that I would get something that looked OK, but this picture was beyond my wildest dreams! It is probably my best photograph from Chaco.
Posted by Ken Spencer at 10:00 PM

Absolutely beautiful! It must have been thrilling to be there.
Bess