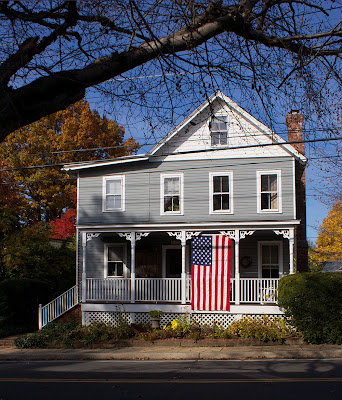 I was on the way to an appointment this afternoon and was running late, when I spotted this house while at a stop sign.  I thought "I can come back later" and then realized the folly of my thinking.  Shoot it now, or it is gone forever.  So I did.  I love the beauty of this giant flag, displayed in honor of Veterans Day.  When I was a kid, the day was known as "Armistice Day," and I remember that because it was my grandmother's birthday.  Armistice day was declared on the 11th hour of the 11th day of the 11th month.  It commemorated the end of World War I.  In 1954 it was renamed Veterans day, which celebrates the service of all U.S. military veterans, while Memorial Day is a day of remembering the men and women who died while serving.  So my question is which of these two photographs do you like best.  I like the top photograph best, even though the flag is not as large. Something about the context of showing the whole house seems to make it more interesting. 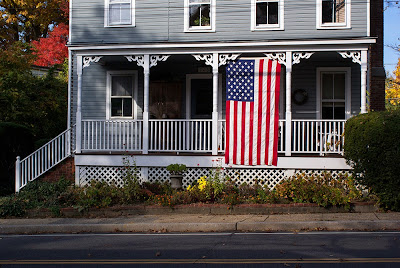 I dislike the distractions of the utility lines and the bare tree atop the wide frame. I prefer the cropped/zoomed lower image... -Dean

Thanks to both of you for your votes. I am still trying to decide.

I like the top photo showing the whole house as it shows the fall foliage and a wonderful old house flying the flag. So, even though the photo is all about Armistice/Veterans Day, I prefer the full photo. bsk