A Good Book, and a Warm Fire on a Cold Day 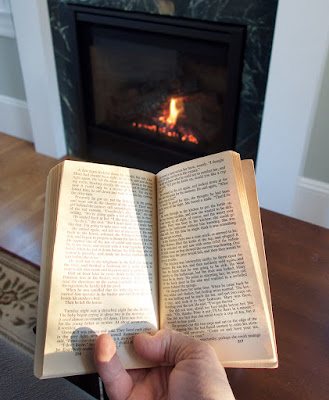 I finally had a chance to try reading in the new back room.  It was chilly, so I started a fire - that involves all of pushing one button on the remote control of the gas fireplace!  The room is cozy and the couch is really comfortable, and it is nice to read in a quiet room.  The book, by the way, is "On The Beach" by Nevil Shute, published in 1957.  It is the story of the end of life on Earth after a nuclear war.  It is a riveting book. The New York Times called On the Beach "the most haunting evocation we have of a world dying of radiation after an atomic war." The Economist has called it "still incredibly moving after nearly half a century."

Hi Ken- Good choice in books - remember reading and loving it in high school, as well as discovering the movie in college with Gregory Peck, Ava Gardner, Tony Perkins and Fred Astair(!). Glad the room is now "broken in"! -Dean

Sorry to hear it was so difficult starting a fire :-) Glad you are enjoying the room now! I have not read this particular book - will try through my library. bsk


Wonderful to sit and enjoy reading in front of a fire.
Joan