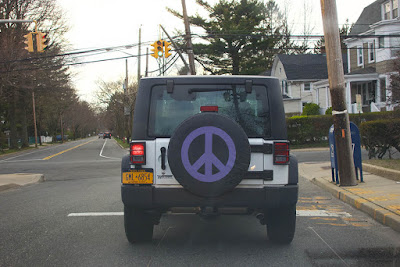 I was sitting at a red light, and then suddenly noticed that the jeep in front of me had a purple peace sign on the spare tire cover.  Then it hit me that I hadn't been aware of seeing any peace signs recently.  Then I began to wonder about the origins of the symbol.  You might be interested to know the peace sign was originally designed in 1958 for the British nuclear disarmament movement by Gerald Holtom. The symbol is a combination of the semaphore signals for the letters "N" and "D," standing for "nuclear disarmament".  In semaphore the letter "N" is formed by a person holding two flags in an inverted "V," and the letter "D" is formed by holding one flag pointed straight up and the other pointed straight down. Superimposing these two signs forms the shape of the centre of the peace symbol.  Amazing, huh?

Hi Ken-
Seems I've heard the semaphore story before, but had forgotten it. Thanks for looking that up for us! You are right, haven't see it around much, but expect the "feel the Bern" folks will be bringing it back!
-Dean

WOW! I have never heard this before and just thought some hippies came up with a random symbol. Peace man! :-)
Joan

It's always an extra treat to learn something on your blog!

Thank you all so much for your nice comments. Maybe if I keep doing interesting stuff, you will all keep coming back!

I had not heard of this before. I am so happy you delve into the history and science of things...Always learning something new from my "big brudder'! bsk