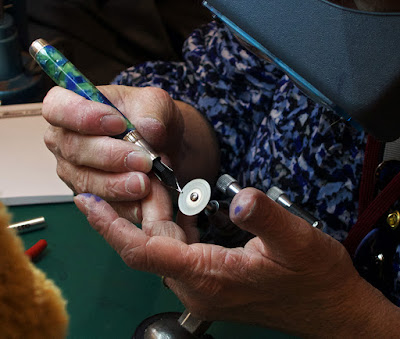 About a year ago I bought a new Parker fountain pen from a store in London, England.  The problem was that when I used it, it was "scratchy" instead of smooth as silk.  So I set it aside.  Recently I discovered that pen nibs can be "tuned up" by specialists to make them write properly.  Several days ago there was a story in Newsday about the Long Island Pen Show this weekend.  So off I went.  This is a photograph of a woman about my age, who "tunes up" fountain pen nibs, and she is considered one of the best around.  She is working on someone else's pen, using a very fine motorized polishing wheel.  Then she uses other extremely fine abrasive cloths to finish the work.  Look at her hands! This work is really hard on the hands.  They are battered and ink stained, but the mark of a superb craftsman.  I had my pen fixed at another booth, (because I just happened to end up there first) and now it writes perfectly!

I never knew you could fine tune a fountain pen. I have not used one since high school. Love this story and the colorful pen she is restoring.
Joan

Joan: There were literally thousands of fountain pens on display at the pen show. It would make you head spin. :-)

I did not know that a pen could be "fine tuned". I tried doing some calligraphy from a kit that has a fountain pen. Fun to try but it will take a lot of time and patience to perfect. The show must have been overwhelming! Glad your pen is in working order now. bsk

Betsey: Funny that we are both drawn to calligraphy. Yes, it takes lots and LOTS of practice to be able to write in italic well. I am not good about practicing, so my letters are poor... :-(