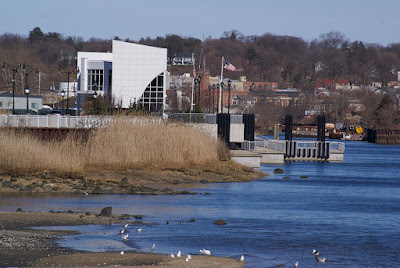 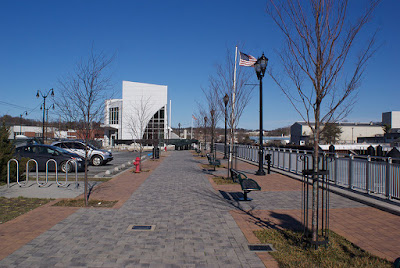 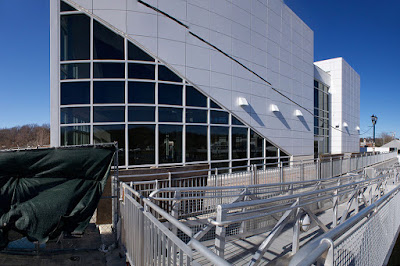 In May of 2001 they built a ferry terminal in Glen Cove, where commuter ferries would take people to Manhattan..  The building was made out of white plastic, and located on a bulkhead near the harbor.  The fast ferry was water jet powered, and it was run by one of the Indian tribes in Connecticut.  The ferry suspended service in November 2001, only six months later.  The abandoned building was still there in 2009, which is when I took the picture below.  So for the last year or so they have been building a modern new ferry terminal that is a real building.  They have put in new bulkheads and sidewalks and fences and all kinds of new aluminum gangways and docks.  The terminal is almost done, which is why I went over there after reading about it, to see the whole thing.  It was mainly funded by the Federal Government, and cost about 15 million dollars.  According to the story in the paper, they do not have a ferry operator yet.  My question is, if the last ferry service didn't make it, what is there about this new service that will make it successful, where the last one wasn't.  I promise one thing, when it starts running, I will make it a point to ride the ferry once to experience it.  I wish I had done that before. 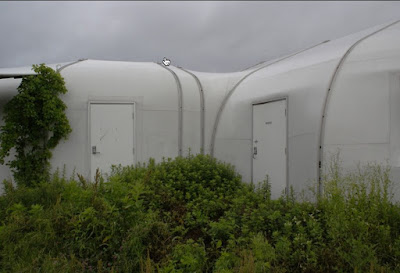 Who got the construction contract and what ties does it have to politicians. $15 million in taxpayer money - could mean big donations to campaign funds. Maybe it'll work if the feds subsidize the commuters' tickets. Wouldn't that be something you'd like your taxpayer dollars going toward? Nothing like this gets done without a lot of winks and nods. Someone profited big time and we little people who foot the bill, as always, get the shaft.