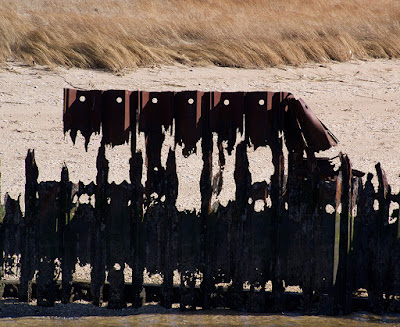 I went walking with my camera down along the Glen Cove waterfront.  They are building a brand new ferry terminal (more on that later) to replace the inflatable ferry terminal that was there for a few years, along with a high-speed ferry operated by a group from Connecticut, but that ultimately went out of business.  Anyhow, this view from the Glen Cove side is looking across the channel to the Sea Cliff side where this is all that remains of steel bulkheading that has been like this for years.  I was composing the picture and realized that it looked as if three pairs of eyes were looking at me.  I thought it made a picture.