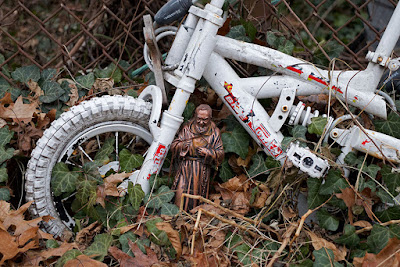 I have photographed this memorial before, to a crash that killed a young man but did not even injure his girlfriend when the car he was driving crashed into a power pole, perhaps intentionally.  I walk by this bicycle and I have photographed some mementos nailed to the new power pole.  I noticed this statue of a saint was added to the "Ghost Bicycle" months ago.  Today I was touched as I walked by and saw a young man cleaning up and raking leaves that had started to cover up the bicycle and the statue.  I walked on and then turned around and headed home, and decided to speak to the young man on my way back.  I said that it was really nice that he was taking such good care of this memorial, and I asked what had happened there (even though I pretty much knew.)  He said that his friend crashed his car into the pole and I could see that he was emotional, so I said "thanks" and continued on.  I wished I had said to him that he was a really good friend, but I didn't think of it in time.