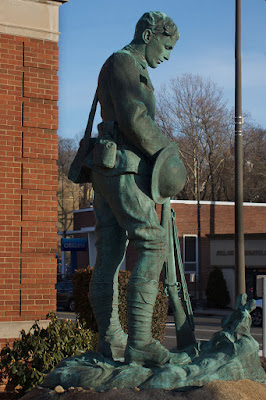 I went down to Staples in Glen Cove to pick up something and as I drove by the library, I caught a glimpse of this statue of a soldier and the light on him made me stop.  I have driven by this statue ever since I came to Long Island in 1966, but I realized that I never really stopped to look at it or photograph it. 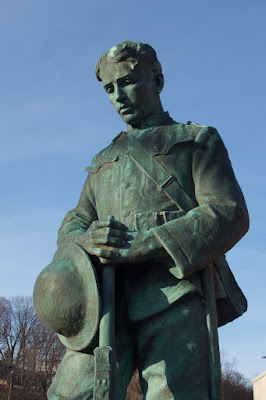 It is a monument to soldiers from Glen Cove who died in the First World War.  It is an absolutely beautiful statue, created by the sculptor J.P. Pollia who was well known for monuments and war memorials like this.  He was an immigrant from Sicily who studied art in Boston Massachusetts and worked as a sculptor, and was director of the Modern School of Sculpture in Boston.  It is hard to explain how beautiful this sculpture is - it is perfectly proportioned and beautifully detailed.  And isn't he a handsome young man.  Perhaps the reason I noticed him was because we recently saw the movie "And They Shall Not Grow Old" which is a documentary made from old movie footage from WWI.  A very powerful movie.  This statue was placed here in 1926. 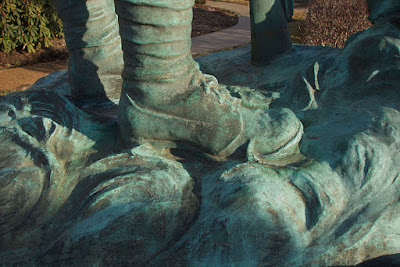 This is a detail of the soldier's boots, showing as well the wrappings on his legs and the shoe laces.  This same kind of detailing is present all over the statue.   OK so here is the amazing thing...  As I was researching the sculptor, I found a list of other statues, most in the northeast U.S. and was stunned to find that there is a different statue of another WW I soldier in Milford, Connecticut, my home town!  And get this - I photographed that statue in November, 2017!  How amazing is that!  I thought that was a beautiful statue as well.  If you are curious to see that photograph, go to the far upper left corner of this page and put "Milford" into the white search box and click the magnifying glass.  It will be the first picture you see.
Posted by Ken Spencer at 8:08 PM

Hi Ken...beautiful photos of a stunning statue! How many times we have driven past and not paid much attention to it...we will, now!! Glad that you have raised our awareness! Babs and Will

Beautiful photos of this statue. Thank you for sharing.
Joan

I am stunned that I have been driving by this statue since 1966! And I like to think that I pay attention...

I am glad that you decided to stop to photograph the soldier. The details are astonishing. And to find out from your research that the artist also did the sculpture of the soldier in Milford just adds so much to your story :-) betsey