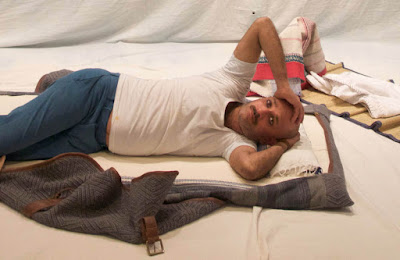 This is Nikhil Chopra, and he is the artist in residence at the Metropolitan Museum of Art.  He is actually living at the Met for nine continuous days in September.  He is also working on a painting which moves around with him as he resides in different galleries.  At each site he will transform a large canvas into some form of shelter.  On the canvas itself he will draw an imagined landscape - sky, earth, water. - an amalgam of places he has seen, remembered or invented.  It seemed weird that all these people were walking by just looking at him, so I decided to ask him a question. I crouched down to ask him a question, and he just stared at me.  Then a museum employee came by and nicely explained to me that he would not interact with visitors. so I stood up, and then took this picture.  This was our interaction.  At least he is looking at me. 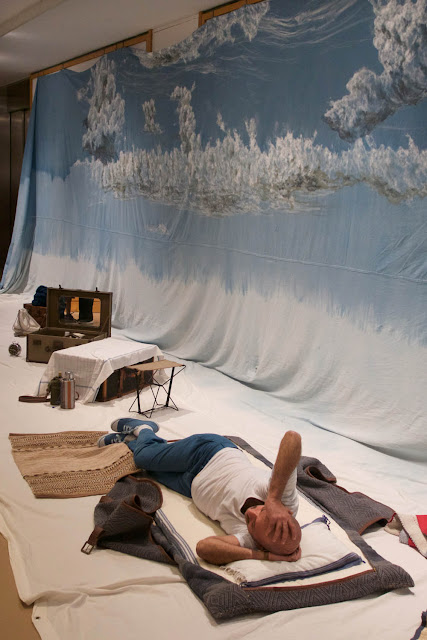 This is a wider view of his canvas and objects that he works with or lives on.  In addition to the large landscape painting, there was some mention of him performing actions and music, but on this day, when we stopped by, he was just resting.

He didn't talk to the famous talkative Ken Spencer? He doesn't know what he missed in conversation.
Joan

Hi Joan! Thanks! You made me laugh out loud!