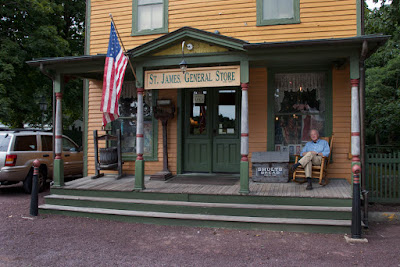 In our touring around Port Jefferson and Stony Brook, Dick said we should drive up to St. James, where he and Trauti lived when they were living here.  I had heard of the St. James General Store, but believe it or not, in all my years living and working here, I had never been to this place.  This store was built in 1857, and much of the community was centered around this store at that time.  The majority of customers consisted of local farmers and sailors who depended on the general store for their goods and services.  The store was owned by a number of individuals and couples over the years, and then in 1990 it was purchased by the Suffolk County Department of Parks where it is one of the buildings in the St James District.   That is a national historic district located at St. James in Smithtown Town, which includes 21 contributing buildings, and two contributing sites. 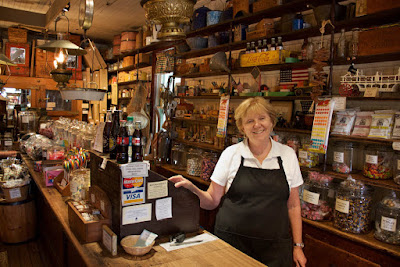 This is Pat who was the storekeeper when we visited, and she was a delight to talk with. Today, as it has done during the second half of the 20th century, the store has sold various late-Victorian-era artifacts. The second floor contains old books and children's toys related to Long Island history.  So I did have to buy one book - about the barns of the North Fork.  Oh, and some licorice!

Dick fits right in sitting' in the rocking chair on the porch. Building looks pretty good for 162 years. I love the old-fashioned interior of the shop with the penny candy jars and memorabilia. I would have had to buy a book, too. So was it red or black licorice? :-) betsey

BLACK Licorice, OF COURSE! :-) . What would you have bought?