The Bison of Yellowstone 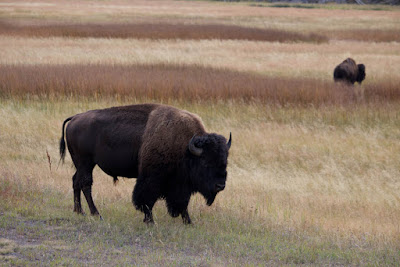 When most people think of Yellowstone National Park, they think of either Bison or Old Faithful.  So here is my first photograph of Bison.  More to come.  The bison herd in Yellowstone National Park is probably the oldest and largest public bison herd in the United States. . The Yellowstone Park bison herd was estimated in 2015 to be 4,900 bison.  The American bison,  found only in North America, is commonly known as a buffalo in the United States and Canada, but it is only distantly related to the true buffalo.  The animal nearly became extinct in the late nineteenth century.  The species' dramatic decline was the result of habitat loss due to the expansion of ranching and farming in western North America, industrial-scale hunting practiced by non-indigenous hunters, and even cases of deliberate policy by settler governments to destroy the food source of the native Indian peoples during times of conflict.  Fortunately attempts to revive the American bison have been highly successful; farming has increased their population to nearly 150,000. The American bison is, therefore, no longer considered an endangered species.

I am so happy to view your photos again. Welcome back! I love this bison's wooly "cape". Quite a remarkable animal. Glad they were brought back from near extinction. betsey

Welcome back. I was having withdrawal symptoms. Betsey stayed over Saturday night and on Sunday morning I clicked on your blog automatically to find nothing, even though I knew you would be of the grid. I look forward to many more photos.
Joan

What a slender and elegant profile! Ann

Yes, glad to see the blogs up again! The bison is a grand animal, I like the storm clouds and the mountains in the geyser's background. Very beautiful! Trace