The Picture That I Didn't Take... 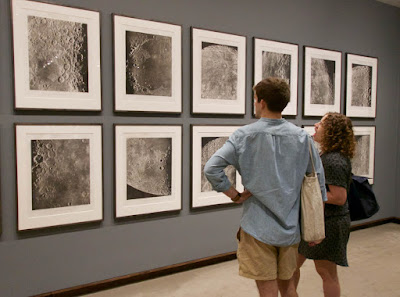 Today I went to Fun City to meet my friends from Austin, Texas, Ron and Ginger.  We had coffee and spent time catching up.  It has been a few years since they were in New York.  Then Ginger and I headed off to the Met to see some of the exhibitions.  We started with "Apollo's Muse:  The Moon in the Age of Photography." As part of this exhibition there was an entire gallery filled with these photographs of the moon, taken by Maurice Loewy and Pierre Henri Puiseux through a telescope at the Paris Observatory, in 1910.  I was explaining to Ginger, as we walked about the gallery. about the different craters, and how they were formed, and how later, smaller craters were found inside older, larger craters, and lava flows inside craters.  A woman came up to me and said "can I ask you a question?"  I said "sure." and she wanted to know what the  rays were from the crater Plato.  So I explained about the impact and how the material in the crater was blown way out of the crater when the huge meteor hit.  She was so thankful, and confessed to following us around the gallery, because she heard some of my explanations and wanted to know more about the geology of the moon.  She was a bit embarrassed and I said not to worry because I love to tell people about things like this. So we had talked to them in the gallery for perhaps 20 minutes!  The husband said that they were from Toronto, and were visiting New York.  He said he had a small telescope at home, and that they were going to try and view the moon from their balcony when they got back to Canada.  So we parted company and they left the gallery.  Five minutes later I thought: "I should have taken their portrait in front of the moon photographs!"  I mean, where was my brain!  I realized that it was probably impossibly to find them.  So I took this photograph of two random people viewing the moon photographs, but this is not the couple from Canada.  Stupid me!
Posted by Ken Spencer at 8:11 PM

I have a vision in my head of the couple from Canada and how thankful they were that you shared your love of astrology and space with them. Maybe you should be a docent in this room at the museum.
Joan

I love that you were their personal docent and shared your knowledge. Good for you! betsey