The Dangers of Wildlife 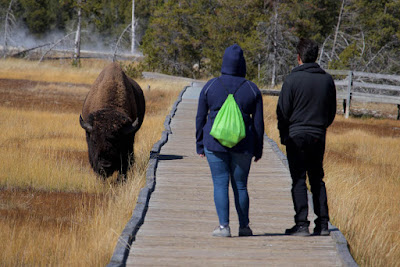 All over Yellowstone National Park, there are warnings upon warnings about the dangers of wildlife.  When people see wildlife everywhere, like elk, bison, and bears, the animals become too familiar, and people get too close.  In Mammoth Hot Springs, you are likely to see a dozen or more elk lounging on the lawns.  In more public spaces, the park rangers are nearby, cautioning visitors to keep their distance.  As of July 2015, an estimated 4,900 bison lived in Yellowstone National Park, the largest U.S. bison population on public land. During 1983–1985 visitors experienced 33 bison-related injuries, about 12 a year, so the park implemented education campaigns. After years of success, five injuries associated with bison encounters occurred in 2015, because visitors did not maintain the required distance of 75 ft.  from bison while hiking or taking pictures.  I ran into this scene on one of the boardwalks in a geothermal area.  A number of people had stopped on the boardwalk  about 100 feet away from this couple.  This couple could be in danger because bison are unpredictable.  Just because they seem calm, visitors need to keep their distance.  I wondered if I should walk forward and tell the people they were too close.  I wondered if I should shout out to them, to warn them.  I did nothing.  I did ask my friend Rush about this, and he said "never place yourself in danger to try and help someone who is acting foolishly."

Scary that they are so close and ignoring the safety rules. I would have felt as you did that you want to tell them to move back or yell or something. Foolish.
Joan

Why would people get so close to a wild animal? You captured what looks like a calm scene but you never know...I would have been afraid to call out because it might cause the bison to move. betsey