Guess Who Owns This House 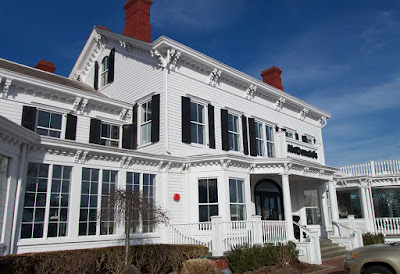 This is called The Denton House, located on Jericho Turnpike in New Hyde Park.  It was constructed in 1795 by a farmer named Joseph Denton.  In 1860 it was given a Georgian makeover complete with gingerbread ornamentation, and throughout the 1900’s, found commercial use as a funeral home and a series of restaurants.  By 1986, it was abandoned and on the verge of falling down.  McDonalds purchased the property with the intention of tearing it down and replacing it with a standard McDonald’s restaurant. Fortunately the citizens of New Hyde Park worked to secure landmark status for the building in 1987. McDonald’s had no choice but to restore the property and work within the parameters of the landmarks commission, which ultimately resulted in their most beautiful restaurant in America! 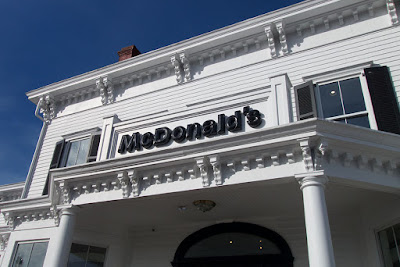 It was astounding to go inside and after ordering burgers, fries and a coke, we sat down in a beautiful dining room with large picture windows looking outside.  It was so hard to imagine that we were eating in a McDonalds!  Isn't it interesting that they made their logo sign in black, instead of red.  Such a smart and elegant idea.

What an interesting story and a surprise to see a McDonald's sign on such a beautiful historical house. I think it's wonderful the townspeople were able to get the house preserved. Trace

WOW! Wonderful news that this beautiful home was restored. It is gorgeous. Thanks to the towns people and McDonalds for preserving this historic home.
Joan

The house is beautiful. Great to read that the town was able to guarantee it's survival. McDonald's did a nice job keeping with the taste and class of the style of the house. betsey