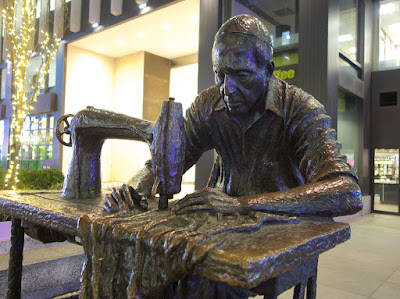 I was in Manhattan tonight for a lecture on the photographer Carlton Watkins who photographed the American West back in 1850.  Walking back to Penn Station, I passed this statue on 7th Avenue, which is known as "Fashion Avenue."  I have seen this statue before in daylight, but there was something about the lighting at night that brought out the textures of the man's face, and the cloth and the sewing machine.  This is by the artist Judith Weller and it is a realistic rendering of a garment worker, wearing a yarmulke, and hunched over a hand operated sewing machine.  The figure is modeled after the artist's father who was a machine operator in New York's  garment industry.  "When I was a little girl, I recall seeing him at work."  The sculpture was created to commemorate the Jewish garment workers, the backbone of Jewish life in New York at the turn of the century.  This is a very powerful work that deserves study and contemplation.

I love this. It is so detailed and beautiful. Love the lighting. Think of Mom's old Singer Sewing Machine and to think they spent the entire day working hunched over the machine sewing to perfection.
Joan

Thanks, Joan. It is a beautiful sculpture, but really difficult to think about the man's working conditions.

What a beautiful sculpture and way to remember and honor her father's and others' life work. Trace

the lighting is very interesting agree with joan. it reminds me of my childhood sewing on various singer machines over the decades and remember my mother's and grandmother's machines. as a hand spinner and weaver in years past, this sculpture is a great reminder to everyone who loves beautiful clothes. most of society has forgotten where the threads and yarn come from, not to mention how they go together to make cloth and then are cut and structured into garments and things useful to all. very nice to see this is on the streets of new york. mazel tov ;-)

Anonymous: Thank you for your thoughtful comments. So beautifully stated. Thank you.

The sculpture makes me think of workers who were underpaid and worked extremely long hours to try to make a living for their families. What a tribute to her father. Glad you photographed this. It captures the beginnings of the garment trade in NYC. betsey