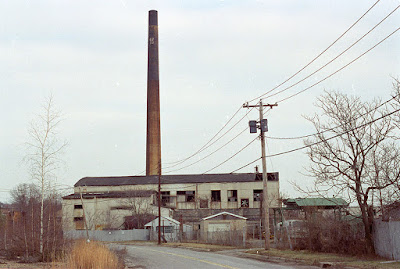 A couple of days ago I found some color negatives with a date of 1994 on the envelope.  I looked at the film and was really excited!  Excited because these buildings were torn down years ago.  They were demolished because this was a nasty place.  The Wah Chang Smelting and Refining Company owned the former Li Tungsten facility from the 1940s to about 1984 and, during that period, a succession of entities, including Teledyne Inc. and the Li Tungsten Corp. operated the facility. Operations generally involved the processing of ore and scrap tungsten concentrates to metal tungsten powder and tungsten carbide powder, although other specialty metal products were also produced.  The company declared bankruptcy in 1985.   The short version of this story is that the land was discovered to be heavily polluted and so was named a Superfund site!  The ground was polluted with hazardous chemicals, and there were even areas that were contaminated with radioactive material! 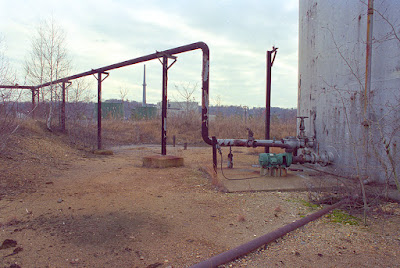 This led to the buildings and tanks being demolished and removed from the site, and then a massive cleanup of the site by the Federal Government that lasted a number of years.  Contractors came in and dug up huge quantities of earth.  There were giant piles everywhere, and then gradually all the material was loaded on trucks and taken off Long Island.  I think it took 2 years or more and must have cost millions of dollars! 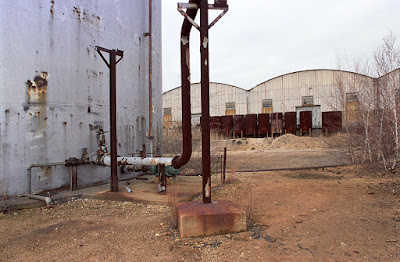 This photograph shows one of the large tanks to the left, and in the distance there are a number of smaller rusty tanks in front of the Quonset huts.   After the contaminated soil was removed, it was replaced with soil from somewhere else.  According to one government report I read, it involved about 130,000 cubic yards of contaminated materials!  So why is this all interesting?  It is interesting because once the land was cleaned and restored, it was sold to a giant corporation and is being developed for upscale housing!  Stay tuned for more.

So many Superfund Sites all over the USA. Where to think they take the contaminated dirt they remove?
Joan

I was wondering the same thing as Joan-Where do they put the contaminated dirt? It's awful how careless and destructive companies can be/have been to the environment. Interesting story. Trace