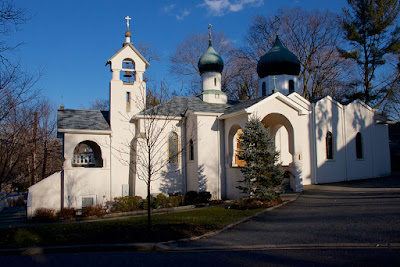 I was driving in Sea Cliff, in an area that I rarely drive through.  That area is the steep downhill part of town that leads down to Glen Cove Creek.  You wouldn't believe some of the roads here, that are so unbelievably steep.  I was looking for a view of the new condos being built across the creek.  So I was driving up and down these roads and stumbled across this church.  The beauty of this church stopped me in my tracks.  And the light was perfect!  There are two Russian churches in Sea Cliff, and I had kind of forgotten about this one.  This one is a Russian Orthodox church and it was founded in 1953.  It is St. Seraphim's Russian Orthodox Church.  In the 1920's there were just a few Russian families in Sea Cliff, but by the 1960's there were more than 200 Russian families living here.

A very nice photo, indeed! I have no recollection of ever having seen this church during our brief time living in Sea Cliff. Hopefully, someday, we will get back to Sea Cliff for a visit and I will insist on a tour of this beautiful little village that will always be fondly remembered.

What a beautiful church! I love the "onion" shaped domes. There is one on the Colt Building in Hartford and It is bright blue. betsey