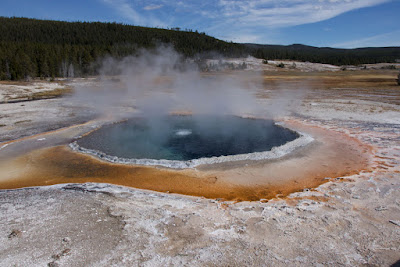 This is Crested Pool, one of the thermal features of Yellowstone.  Isn't it stunning in its coloration?  Crested Pool is a hot spring in the Upper Geyser Basin in Yellowstone National Park. The spring is 42 feet deep. It is named for the "crest" which surrounds the pool. Although it is considered a spring, Crested Pool sometimes erupts like a geyser.  A study that was completed in 2011 found that at least 1283 geysers have erupted in Yellowstone. Of these, an average of 465 are active in a given year. Yellowstone contains at least 10,000 thermal features altogether. Half of the world's geysers and hydrothermal features are concentrated in Yellowstone.  As beautiful as these features are, they are also dangerous.  In 1970, a nine-year-old boy, accidentally fell into the spring and died. There is now a public safety achievement award given yearly to the individual or group that contributes the most in public safety.

This is gorgeous. Love the copper and teal blue colors. betsey