The Elk at Mammoth Hot Springs 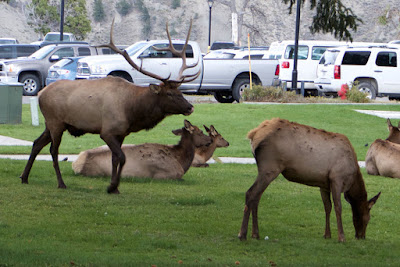 This is a group of Elk at Mammoth Hot Springs.  These animals own the place - they go where they want to go - in the street, and on the sidewalk, and on the grass.  Park rangers keep their eyes on the group and keep park visitors at a safe distance.  This image is a cropped version of the image below.  Below, the Bull is shown with members of his harem.  Adult elk usually stay in single-sex groups for most of the year. During the mating period known as the rut, mature bulls compete for the attention of the cow elk and will try to fend off rival bulls from their harem.  Dominant bulls follow groups of cows during the rut, from August into early winter. A bull will defend his harem of 20 cows or more from competing bulls and predators.  The ranger said that this particular bull had fended off a number of other males that had come around. 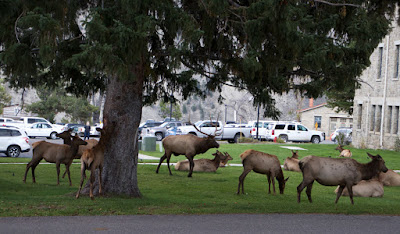 Love the informative story, but I would not want to be so close to these creatures.
Joan

Hi, Ken...We love all of your photos from Yellowstone! It is truly fabulous and photogenic country! Love the elk...to us, the animals belong here...and humans stink! Thanks for sharing all of these great vistas and spectacular views! Let's see more!!! Babs and Will