This Man Doesn't Know How to Use His Camera! 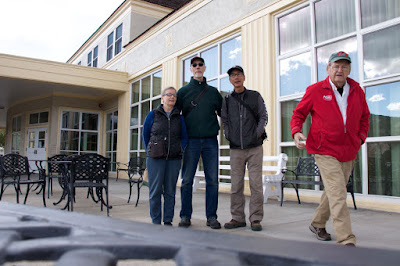 We were at Mammoth Hot Springs and I decided to do a photograph of the four of us with the self timer.  This camera is relatively new to me, and some of the timer settings were unfamiliar.  It turns out that I set the self timer to take 10 pictures when it went off, instead of using a 10 second delay.  So we all stood there while the yellow blinking light counted down, and then I started walking away, thinking that the picture had been taken.  Guess what, the end of the blinking light meant the camera was STARTING to take 10 pictures!  So there is no photo of me with the group, just a sequence of me walking away!  Hey, I am some crackerjack photographer, right?

It takes a good "crackerjack" to admit he made a mistake with the new camera. I love that you posted the photo with your explanation! betsey