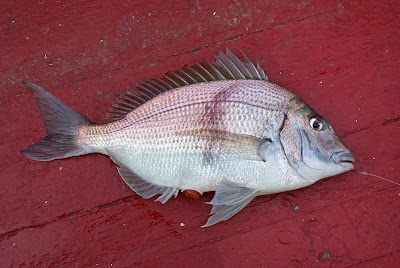 So this is another photo left over from fishing in Montauk. This fish is a Porgie, I believe, one of the fish that Kathy caught. I have never been a fisherman. No particular reason, but it just didn't interest me - I would rather stand around with a camera watching, which is what I did on this trip. When this first fish was caught, we all looked at it, and the mate put it on the painted deck. I moved in close to it to photograph and was struck by how magnificent an animal this is! We all realized that it was so beautiful, and we felt badly that it was dying. I just didn't expect that reaction. We all felt really badly. More fish were caught, and several hours later we ate them for lunch, and they were the best fish we had ever eaten. But man, it is tough to see them this way, fresh from the water with their life ebbing away.
Posted by Ken Spencer at 10:04 PM

Porgies used to be considered throw-away fish, among the cheapest at the fish market. But my mother could make a porgy taste like a gourmet trreat. She'd heat oil in a frying pan with a couple of slices of fresh ginger, salt the fish, and fry it until the skin was crisp and the flesh still moist and flaky. Then she drizzled it with soy sauce. We ate it on the bone and sucked the little pieces of meat that stuck to the skeleton, being careful not to swallow the needle-like ribs. Man, that was good eatin'! Nothing beat fresh caught fish.

And you're not supposed to watch them die, you're supposed to keep them in a bucket of water from wherever they were caught until they can be scaled, gutted and cooked quickly.

Thanks for this information. You're right - actually, the mate put all the fish in a bucket of seawater. I guess I asked him to put the fish on the deck first, so I could see the fish on a plain background and photograph it.